What Is Your Dog’s Bite Style?

Have you noticed a pattern in news stories about dog bites? Do you wonder why certain breeds seem to show up the most in these cases?
According to the CDC, there are more than 4.5 million dog bites every year in the United States. While that is a massive number of dog bites, most of these incidents do not cause severe injury. In 2017, 645 of those bites were damaging maulings, and 57 resulted in a fatality. Four main groups of dogs made up most of the severe attacks. They are all breeds who genetically have reason to bite differently than the average dog. Let’s take a look at various groups of dogs, and how and why they bite the way that they do.

Sporting Breeds
The sporting breeds include Pointers, Retrievers, Setters, and Spaniels. This group is notorious for being recommended as family dogs, and for a good reason. They are generally highly social, eager to please, and easy to train. We breed these dogs for jobs that required them to work very closely with people and dogs in the field, and it is uncommon to see aggression from them. They also tend to have a “soft mouth.” Retrievers have been selectively bred for generations not to bite down hard when bringing back a bird, as a hard bite would damage the bird. That does not mean that these breeds are not capable of breaking the skin when biting, but they do very little damage when biting. You will not see many cases of a sporting breed seriously hurting a human.

Toy Breeds
Toy breeds are your typical “lap dog” types. Shih Tzus, Toy Poodles, and Pugs are some of the dogs in this group of breeds. You may have heard statistics that Chihuahuas and Dachshunds bite more frequently than Pit Bulls and Rottweiler’s. There is some truth to this: those two toy breeds are infamous amongst vets and groomers for being snappy and aggressive when handled. However, these dogs are tiny and cannot cause nearly as much damage as a bigger animal. They also tend to bite out of fear, and will typically snap and retreat as a defensive behavior. In a study of more than 8000 dog bites, toy breeds represented a minimal number of cases. Infections caused by the dog bite caused most of the pressing issues related to them. These breeds do correlate with child fatalities, and all dogs should be closely supervised with kids, no matter how small they are.

Hounds
Hounds are a more diverse group of dogs, and it isn’t easy to group them as jointly as the first two groups above. Some hounds hunt by sight, while others hunt by scent. Incidents with sighthounds are low. They typically only show aggression with the small animals that they genetically are bred to hunt. A child running could trigger the prey drive of these dogs, but they are not likely to bite with serious intent on a human. Scenthounds are a bit different and vary based on the breed. Beagles, Bassets, and Coonhounds are more likely to bark their heads off than to bite anyone. If they do bite, they tend to nip rather than grab and hold. Hounds bred to be “catch dogs,” such as Catahoulas, have more grab-and-hold-type-bite style, which means that bites from these types of dogs tend to be more serious. Many catch dogs cross lines with terrier and Mollaser/Mastiff breeds so that they can share a similar bite style.

Northern Breeds
Northern breeds like Huskies, Akitas, Chows, and Malamutes are responsible for a large number of fatalities and maulings. These dogs tend to be more primitive in their behavior, and are often aloof, independent, protective of their resources, and have intense predatory behavior. When dogs bite out of the predatory drive, the bites tend to be severe as the dog is biting to kill something that they perceive to be prey. These breeds also tend to be large and very powerful, and can easily out-muscle an adult human, let alone a child.

Wolf Hybrids
The data on Wolf hybrids is a bit skewed because many suspected Wolf hybrids are Malamutes, Huskies, or mixes of similar breeds. Wolf hybrids also vary quite a bit in the amount of wolf versus dog, with some individuals having very little wolf blood. But a little goes a long way, and these hybrids act far more like wild animals than they do like domestic dogs. Since 1982, Wolf hybrids were responsible for 19 deaths and 56 maulings in the United States. They are now banned in many areas or have restrictions on who can legally own them. A Wolf Hybrid is one type of dog that has shown to attack their owners, and several of these attacks share things in common with attacks by captive big cats and bears. It is important to remember that Wolf hybrids are NOT domestic dogs, and will behave like a wild animal. This includes a strong predatory drive, little to no regard for humans, and an opportunistic nature.

Herding Dogs
Herding dogs are another group that varies quite a bit. One group of herding breeds are the Heelers, such as Cattle dogs and Corgis. These dogs have earned a reputation for being biters, but they rarely cause serious injury. They are bred to bite cattle on the heel to drive them forward, but that job also requires that they retreat very quickly to avoid being kicked. They still maintain a bite style of running up, biting with their front teeth, and then retreating. These bites will typically bruise badly, but often do not break skin, and these dogs will usually only bite once or twice at a given time.

Most sheep herding breeds, such as Collies and Australian Shepherds, have a similar bite style when they do bite, but do not bite as frequently as the Heelers. Their herding style is different. They tend to use their bodies and their eyes to intimidate and control livestock rather than their mouths. These dogs do, however, have a strong prey drive and like to chase things, so movement like a person running or biking could trigger tracking and nipping behavior.
The third group of herding dogs is those who were bred for both herding and protection work. These dogs include German and Belgian shepherds. These breeds are involved in a higher percentage of severe dog bites than the other herding breeds, partially because they are so much bigger than many of the herding dogs. They also tend to bite multiple times rather than beating a retreat like the heeling breeds. Many people think that the dogs from this group who attack people are trained as police or guard dogs. Still, bites from that group of dogs are infrequent.

Guardian Breeds
Guardian breeds are split into a few different groups. Livestock guardians include breeds like the Anatolian Shepherd, Great Pyrenees, and similar dogs. These dogs are very neutral to their livestock, but are fierce protectors, and will keep everything from coyotes to stray humans. This group of dogs has been responsible for human fatalities, and they are not the type of dogs to give a warning bite. Their job is to eliminate threats to the livestock, so they tend to bite with serious intent to harm when they bite.

Mastiff type dogs make up another group of guardian breeds. This group includes Rottweilers, Cane Corsos, Bullmastiffs, English Mastiffs, and many other varieties. Mastiff types are the second most common type involved with human fatalities. The most famous case of Mastiff’s killing a person was in 2001 when two Presa Canarios killed Diane Whipple in San Francisco. That incident was not an isolated one, and every variety of this type of dog has been involved in at least one severe mauling or death. Mastiffs were historically used for many purposes. From being war dogs to catching and killing wild boar, so it makes sense that these dogs would have durable grips and a propensity for biting. These dogs are also the largest in the world, so it is challenging to gain control once they have engaged a perceived threat.

Terriers
Terriers were developed to catch and kill other animals, typically vermin that needed to be exterminated in Victorian England. Different sizes of terrier were for different needs. Jack Russell and Scotties were ratters, while the Airedale, “king of the terriers,” would go after badgers. As you can imagine, it takes a pretty tough dog to throw down with a badger. This toughness and tenacity led some breeds of terrier, such as the Bull Terrier, Staffordshire Terrier, and Pit Bull Terrier, to be used for bull-baiting and dog fighting.

All of the traits that made these dogs so good at their jobs have also led them to be responsible for more human deaths than any other type of dog. A good terrier is highly determined, fierce, insensitive to pain, easily excitable. When they do bite, they hold on and do not let go until they have won. These traits were essential when going after an animal that would fight back and could hurt the dog. It also means that these dogs can do severe damage when that aggression is directed at a human. Pit Bulls, similar breeds, and their mixes represent most of the news stories you hear for these reasons. Five other breeds of smaller terriers have also been involved with maulings and deaths, predominately on young children and elderly people, who are easier for a small dog to overpower.

It isn’t a coincidence that you see so many dog attack news stories involving the same types of dogs. The same traits that make these breeds so good at their jobs can also have serious consequences when not managed appropriately. We are putting this information out there to help people interpret the statistics and help bring those numbers down. Understanding the different types of dogs that we share our lives with and what they are capable of is critical in reducing the number of dogs bites every year.

When bringing a new baby into your home, you want to make sure that your dog gets the best preparation possible. Click here to take the Dogs to Diapers online training course for professional advice and instruction. 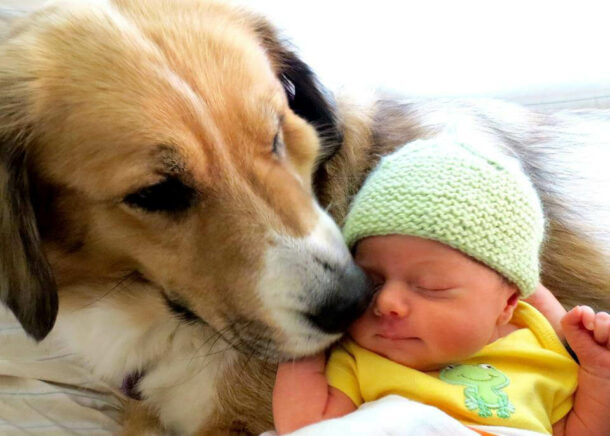 No obligation!
Just enter your email and check your inbox!

Your guide is on the way!

Shopping cart
There are no products in the cart!
Continue shopping
0